In the centre of Alvesta, the central town of the municipality of Alvesta, are the five buildings of the historical farm Riksdagsmannagården, the last remaining witness of an epoch when Alvesta was still a farmers' village.

In the 17th century Alvesta consisted of eight large farms, seven of which were located in the area of the present town centre. One of them was the farm Södregård, whose owners were members of the Swedish Parliament from the end of the 18th century, after which the farm was henceforth called Riksdagsmannagården. The farm was owned by the same family for eight generations from 1718 to the mid-1950s. From 1792 to 1887 three generations of the male members of the family were successively members of the Swedish Parliament as representatives of the peasant class.

There were large amounts of land belonging to the farm, which became more and more attractive as Alvesta expanded along the southern main railway line after the station was built. In the 1930s, the municipality began to purchase land for housing on a large scale, including land belonging to the farm. However, when the municipality also wanted to buy the farm itself to build an administration building at this place, the owner at the time, Carolina Svensson, daughter of the family's last member of the parliament, strongly resisted.

She interfered with the plans of the municipality by concluding a contract with the local heritage association for the later purchase of the farm, which made the area uninteresting for the municipality and ensured the continued existence of the historic buildings. Carolina died in 1939 and after her two childless daughters had also died in the mid 1950s, the local history society Norra Albo Hembygdsföreningen took over the Riksdagsmannagården as agreed.

First of all, the local history association had the old main house from 1788 standing at the southern end of the court grounds renovated, including the two wing buildings of approximately the same age. In the 1950s, the old main house was initially used as a café, but later it was converted back into a residential building as it is still used today. In the two wing buildings, which used to be storage sheds, the clubhouse of the local history association is located on one side, and the office of the study association for adult education is located in the other building.

The two-storey building standing laterally behind the old main house is the new main house from 1827, in which the family of the former owners lived until their end. The house is open to the public as a museum, and with its wallpapers, wall paintings, tiled stoves and all furniture and furnishings from the family possession, it largely corresponds to the condition of the 19th century.

The only building that does not originate from the original farm is the large historic warehouse with loft at the northern end of the farm grounds. It originates from a nearby village and was moved here by the local history association as a replacement for the farm's former large barn.

At the beginning of the 1970s the local history association was no longer able to finance the maintenance of the farm on its own, so the municipality took over the farm. As the special historical importance of the farm for Alvesta was now recognised, there was no longer any danger of it being demolished as in the 1930s.

1975, the Riksdagsmannagården, which is located like an island in the sea of urban development, was declared a historical monument as a historical witness to Alvesta's origins and a special example of old architecture. The old main house and the two wing buildings were subsequently restored with the original grass roofs with funds from the Monument Protection Agency and the foundation walls and fireplaces in the main house from 1827 were restored. 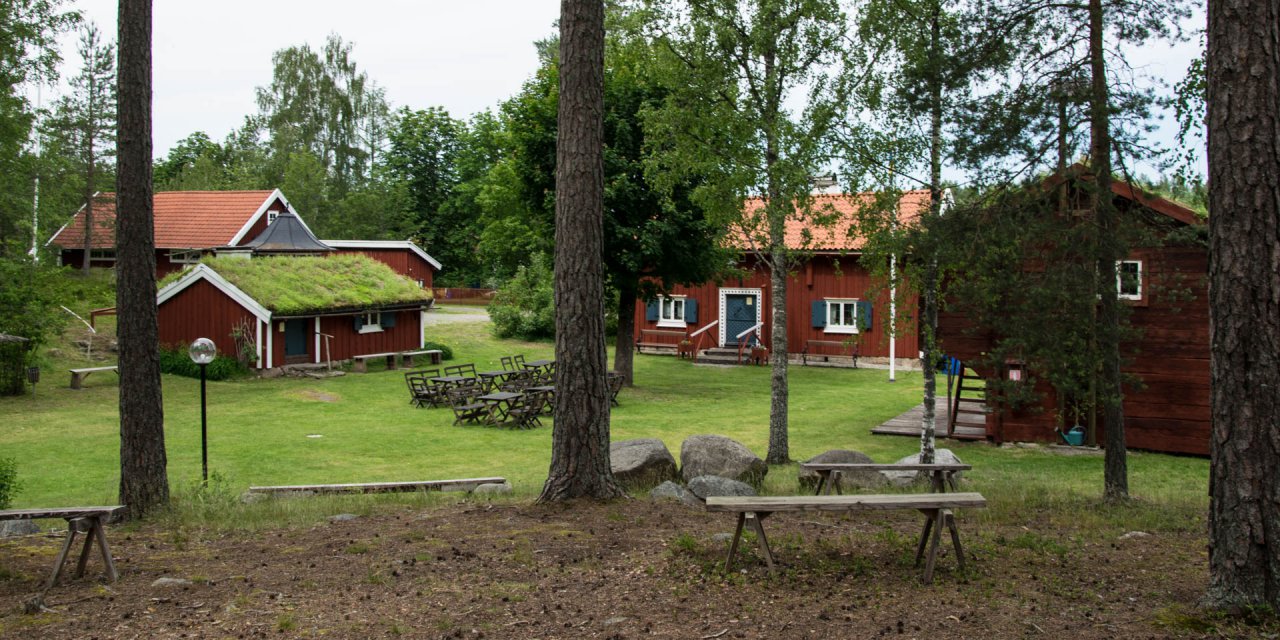